Continuing my reread with the illustrated editions! Gotta get through this one so that my daughter can start it next. <3

“It is our choices, Harry, that show what we truly are, far more than our abilities.”

What can I say that hasn’t been said before about this series? What words can do this book justice? I’ve felt at a loss on how to explain my feelings for these books as I’ve read them. I didn’t experience them as a child and therefore my experience is clearly different than most others on here, but in some ways I think it’s just as magical to read these for the first time as an adult as it was for everyone who devoured these as they were published in their childhood. I have kids, so I was constantly wondering how my 5 year old will accept these books when she’s a bit older and tried to view the story through her eyes.

The holidays are always a busy, stressful time for us. All of our family is a hefty distance to travel to and, on top of that, we’re moving into our new place this month. All I could think about was how desperately I wanted to escape all of my adult responsibilities for just a bit each day, and this was the perfect book to do so with. No matter your age, the magical world of Hogwarts is truly spectacular; the characters are such that they stay with you even after the final page is turned and the writing takes you back to a place you weren’t sure existed for us old farts anymore. If you have been hiding under a rock for the past 20 years like I have, I highly encourage you pick these books up and get swept away like I did. Time is a precious commodity these days, and you couldn’t spend it in a better way than with these precious kiddos.

I sat down to “read a few pages” of this before bed two nights ago and had to force myself to stop at page 100…then picked it up and flew through the rest the next day.

I really enjoyed this one (as did millions of others, obviously) and, with this installment, I am definitely seeing why this is such a beloved series. The magical wizarding world of Harry, his friends, and the folks at Hogwart’s is just FUN to read about.

I am in LOVE with Fawkes the phoenix and I adore Dumbledore…And now I am so worried something bad is going to happen to one of them over the course of the remaining books.

And, yes, I know it’s probably made you gasp in shock that – in addition to never having read the books before now – I have also never seen any of the movies…and I truly have no idea what happens throughout the remainder of the series.

I guess it IS possible to blissfully ignore spoilers for over two decades…unless we are talking about Game of Thrones. Good luck making it a fucking day with all the assholes posting every single scene on Twitter.

So yeah, firstly, loved this book and looking forward to the next one.

And secondly, now more of the art on the HP mug I got from OwlCrate a few months ago makes more sense and I totally love it more now, so there’s that. 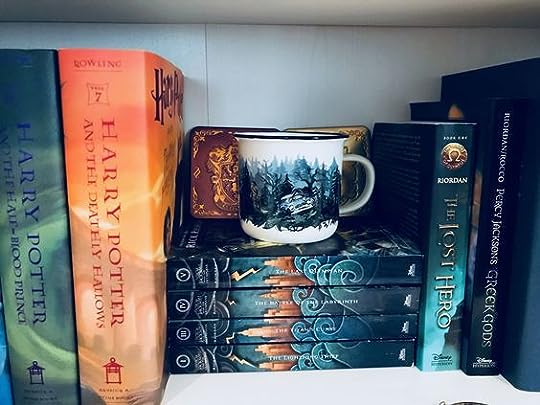 I am always surprised by J.K. Rowling’s ability to make her books an allegory of our modern world and it’s big and hideous problems. We all know, after all, that she covered discrimination, wars, hate crime, the Kardashians, etc.

Let’s take this book for example. Harry goes back to Hogwarts. Now enter Gilderoy Lockhart. A fame enamored charlatan, who knows nothing about anything, except memory spells. So clearly a Kardashian. Now some might ask: do Kardashians know memory spells. And the answer is clearly YES! Keeping Up with the Kardashians is already on Season 13, so some magic must be at work, otherwise you’d have to think the world has gone mad!!!!!

Carrying on, Harry has an awful year, mostly because of the fact that he can talk snake language. Actually all of Harry’s life is an allegory about fame and how it can easily destroy you, hence Harry might’ve been modeled after Lindsay Lohan. But Rowling had to give a moral to the story and because of that Harry ended up fine in the end… mostly.

And to crown all of this awful year, he meets Tom Riddle, who is the heir of Slytherin. He also speaks snake language and has a giant serpent for a pet. So definitely a forefather of Taylor Swift. And look at what that those family ties made her do!! Lessons to be learned from here, people!

Now, of course, a lot of questions remain: will the Kardashians magic still work for long? Will Taylor have a nose job so she could resemble her grandpa? Will I finish this review already?

Only time can tell…

While this is probably one of my least favorites of the series, it’s still a fantastic book. I can’t say for sure why I don’t love it as much as the others, but it’s just never stood out to me.

However, upon rereading it, I am reminded again how great Rowling is at developing a story arc! There are so many hints to later parts of the series in this book! Especially with Tom Riddle showing up, the diary, hints of Ron’s affection for Hermione, and overall just building up the characters and storyline. It’s also really fun to see things of importance show up early in the story come into significance later on.

Here are some thoughts on things I noticed or didn’t remember about this book while I was reading it:
-Like in one of the Harry Potter video games, Ron and Harry de-gnome the Burrow’s garden at the beginning of the book.
-Hermione’s parents actually go to Diagon Alley and exchange Muggle money at Gringott’s!
-Why wasn’t Nearly Headless Nick’s deathday party in the movie? Also he died in 1492 which is when Columbus ‘discovered’ America. Significant?
-“And some old witch in Bath had a book that you could never stop reading! You just had to wander around with your nose in it, trying to do everything one-handed.” (p.231) Sounds familiar.
-I really wish they had the Valentine’s Day party in the movie, with all the dwarves walking around dressed as cupids and delivering love messages.
-Aragog is literally my biggest fear.
-Apparently Dumbledore, back in the day, was a Transfiguration professor at Hogwarts.
-And finally, I knew Voldemort was an heir of Slytherin, duh, but I didn’t realize he was the last heir of Slytherin. Dun dun duuuun.

5/5 stars because even when it’s my least favorite of the seven, it’s still perfect.

It’s actually quite fascinating how much happened in this book, to be honest.

I Stand Before You Book reviews

The Hobbit, Part One Book reviews