Some Reviews: 2156 in Goodreads.com

I can’t praise THE CHILD THIEF highly enough. I read it several Christmases ago at the behest of a graphic-novel loving friend and, in spite of hating comic books and disliking the work necessary to decode them, I took a chance on this book.

Why make money for people who don’t respect my data, except as they can profit from it?

A runaway named Nick is fleeing the wrath of a drug dealer when he runs into an odd boy named Peter. Peter saves Nick and takes him to Avalon, recruiting him into gang of nearly feral boys called The Devils. With Nick’s help, can the Devils overcome the Flesh Eaters, the transformed men who defile and destroy Avalon?

The Child Thief is one hell of a grim retelling of Peter Pan. He’s not prancing pixie in this, that’s for sure. Peter is an amoral hero for the most part, as are the Sidhe, much more like Michael Moorcock’s Melniboneans than Tolkien’s elves. The Devils are more like the kids from Lord of the Flies than how the Lost Boys are normally depicted. For much of the book, two stories are told in parallel. One of Peter’s birth and early days in Avalon, trying to fit in with Modron and the Sidhe, and one of Nick trying to fit in with the Devils.

I didn’t think the writing would be as good as it was since Brom is normally known as an artist. His prose is much better than I expected and the characters are well developed. I was particularly impressed with Peter and The Captain. You know the captain I mean…

If you like your fantasy dark, this is your book. It should appeal to fans of Neil Gaiman and Tim Burton alike. Now go out and get it!

6.0 stars. This one goes on my “select” list of 6.0 star books and my list of all-time favorites. See my expanded review here. I absolutely loved this book from beginning to end. Dark, disturbing and beautifully written with breath-taking pictures that truly enhance the reading experience. Highest possible recommendation.

It was awesome! Talk about fractured fairy tales! It took the Disney-ized tale we grew up with and gave it a wicked set of teeth! The Lost Boys are no longer adorable waifs wrapped in teddy-bearish outfits, and life in Neverland is not a romp in an enchanted realm, but a savage struggle for survival against creatures of unbelievable viciousness. This book is definitely not for children. It was still a very absorbing story, and Brom does a great job of fleshing his characters out from the cartoonish images we know and love. No one is completely good or bad–every character has compelling reasons for his actions, even “the bad guys.” I give it an R rating for language as well as violence, so I will not be recommending it to my students. Adults, however, may enjoy having this pastel story from their childhood re-presented in vivid colors and gory detail!

I finally finished this one! Thanks to retail (ironically in a bookstore) holding me back from getting this completed faster.

I didn’t enjoy this as much as Lost Gods but it was still a great journey with wonderful mythology. 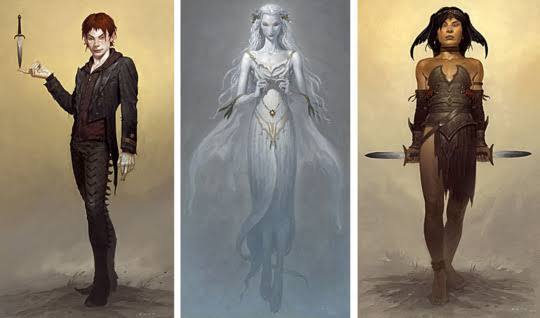 Birth of a Killer Book reviews